Pry is an interactive novella app made by Danny Cannizzaro and Samantha Gorman. The novella app allows the readers to pry open or pinch close to get more out of the story. It is about a man named James who was in the Gulf War stationed in I believe Dharan, and is now a veteran who works in demolition with his buddy Luke who was stationed with James in the war. Another character seen is Jesse; she was also stationed with them in the war. James and Jesse were friends while Luke and Jesse were lovers.  James is the narrator of Pry; he is suffering from post traumatic stress disorder (PTSD) and is loosing his sight. In chapter two he says his doctor says it is psychosomatic but James believes its all real making him not a very reliable narrator. The reader has to figure out what is true and what is just made up in his head to get the full story. 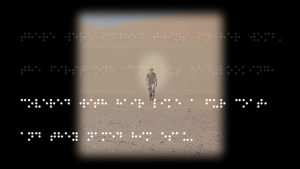 After returning from the war he is in a new battle while getting back to a life without the war, a battle to keep the past behind him and stay in the present and move forward. But he cannot keep his past from colliding with the present making it hard for him to function in everyday life. James wants to forget what happened in the desert during war but can’t, causing him strange thoughts and hallucinations.

Through this novella the reader sees texts and video along with some sound. The text showing his thoughts can be pinched or pried. Pinching the text close leads the reader deep to his subconscious and prying it open leads to his consciousness and what is going on around him. Every time you p 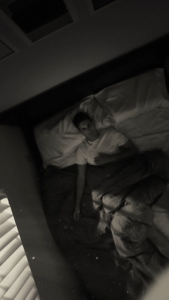 inch, pry, read, or run you figure over the braille you get more information whether it be his real life around him or what is going on in his head, both can be confusing and strange. Not only does is have text to read but there is video with sound, and James reading to you. You must reveal everything to get the full story and even then it can be confusing and unfinished.

On each chapter it shows diamonds, these diamonds help show the reader how much was revealed in that chapter they just went through. If there are two diamonds out of four then the reader has only got half of what the chapter has to offer. The more you pry into a chapter the more you will get out of the story and maybe answer some of your questions, “Dig deeper and you’re rewarded’ (Cannizzaro). The reader will find information on Jame’s past as a child, his time in the war and his current state, the more the reader digs the more they will find. This novella grabs the reader and makes them want to dig for more. It even makes people who do not like to read (like myself) to want to read and stays interested wanting the whole story.

But is James crazy? No. Insane? Not at all. You wouldn’t call a war veteran that just came home crazy when he/she dove for cover behind a near by stack of logs when a evacuation test alarm goes off. Sick? Yes. James suffers from PTSD and probably some other disorders in result from the war and maybe even from loosing his sight. But not crazy.